Dedicated Follower of the Kinks

“The taxman’s taken all my dough and left me in my stately home lazing on a sunny afternoon ~ and I can’t sail my yacht he’s taken  everything I’ve got ~ all I’ve got is this sunny afternoon”. words written by Ray Davies of the Kinks.

We have two things in common with the lyrics above ! The taxman has recently taken all our dough and with summer fast approaching at least hopefully we will get some sunny afternoons!

The original Kinks line up was : Ray Davies guitar & vocals and main songwriter, Brother Dave Davies supplying the  fierce guitar work, Mick Avory laying down the back beat and Peter Quaife on bass who sadly recently passed away.

The next Kinks record that I bought was the LP “Sunny Afternoon” in 1967 on the Marble Arch label which was the budget arm of Pye Records and features four hit singles and some brilliant Kinks B~sides and EP tracks, this record was jammed full of gems from the mid~sixties and complete with the greatest LP cover! 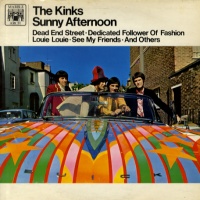 Named after their current UK No. 1 hit 45 the album kicks off with “Sunny Afternoon”  which has the trade~ mark Ray Davies lyrics and is followed next  by “ I Need You” which is so good it would have been a hit in it’s own right ~ pure garage metal  rock.

Next up was “See My Friends” which has a repeat hypnotic Indian feel to it and reached No. 10 in the UK charts followed by “Big Black Smoke” the B~side of  “Dead End Street” and really sums up the Fagin feeling of being poor in dirty of London which a lot of us can relate too!

The end song  of Side One is the classic “Louie Louie” written by Richard Berry and was a big hit for the Kingsmen in the USA in 1963 but this Kinks version would have made the charts as well. Pure rock n roll!

Side Two kicks off with “Dedicated Follower of Fashion” which is the Kinks at their best taking a swipe at the Carnaby fashion scene in London and drawing heavily from British music hall traditions in it’s mocking scornful lyrics! and reaching No. 5 in the UK.

They seek him here they seek him there his clothes are loud but never square!  Oh Yes he is!

Next track is  Sittin’ On My Sofa  : B~ side of “Dedicated Follower of Fashion”  and  a great up beat song with great bass playing from Pete Quaife.

Next up is  Such A Shame : Appears on the B~side of the US 45 “Well Respected Man’ and again  has great RayDavies lyric and melody.

Track 4 is one of my Kinks favourites “I’m Not Like Everybody Else”  B side of  “Sunny Afternoon” which features brother Dave Davies on vocals and what a great job he does as well!

Also Dave Davies had a number of hits in his own right including “Lincoln County” “Susannah’s Still Alive” and probably the most famous “Death of a Clown“. Great to hear if you haven’t already!

Last song on the album is “Dead End Street” which reached No. 5 on the UK chart and is very popular with people who live in a Cul~De~ Sac’s but the rest of us like it because like so many Ray Davies songs it speaks of the Englishness of the upper and working classes.

I like my football on Saturdays ~ Roast beef on Sundays ~ It’s all right!

This entry was posted on Tuesday, May 10th, 2011 at 3:24 pm and is filed under 45 rpm Singles, Beatles, British 60's LP's, British Blues Boom, British Invasion, British Punk Rock, British Rock, British Vocalists, Ipods and Record Players, The Beatmerchant Specialty Record Store. You can follow any responses to this entry through the RSS 2.0 feed. You can leave a response, or trackback from your own site.