First Encounters of the Vinyl Kind

My first encounter with vinyl records was in England when I was 5 years old, the year was 1957 and rock n roll was everywhere. My Auntie Gwen had the 78 rpm record versions of ‘All Shook Up’ and ‘Hound Dog’ by Elvis Presley. I knew all the words to those songs as she played them so much and I loved Elvis’s voice, but it was the guitar solo and the machine gun snare drum fills on ‘Hound Dog’ that really caught my ear! 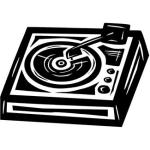 Christmas 1962 and my Mum (God bless her) & Dad bought me my first record player. It was a blue & cream Dansette player which was real hi~fi in those days! Along with the record player came five 45 rpm records that Christmas day and what a present they were!. I remember I stacked them up on the Dansette and watched in awe as they dropped down and played one after the other, down the record would drop and across the arm would come and gently drop down on the record. The pleasure I got from this player and the five records will always hold a special place in my heart.

Here are the records I received Christmas 1962

Elvis Presley was still dominating the British charts back in 1962 and this Christmas week he was at No. 1 with ‘Return To Sender’ on the RCA Victor label. At nine years of age I didn’t really know what ‘Return To Sender’ meant by I loved the record anyway!

Britain’s answer to Elvis, Cliff Richard was at No. 4 with two songs from his film ‘Summer Holiday’ the A~side was ‘The Next Time’ but it was the B~side that I really loved and played to death, the classic ‘Bachelor Boy’ with Hank Marvin and the Shadows playing behind Cliff. Great words!

At No. 6 this week was Let’s Dance by Chris Montez with the spoken count~in 1 2 3 4 , then that driving back beat Indian drum sound and that memorable organ solo which still sounds great today!. 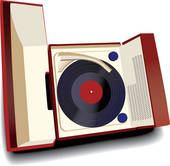 The big Christmas record that year was at No.9 ~ was by Brenda Lee called  ‘Rockin’ Around The Christmas Tree’ with that raw Boots Randolph sax solo ~ brilliant and it’s still my favourite Xmas record.

At No.10 in the charts was the futuristic ‘ Telstar ‘ by the Tornadoes with the equally brilliant ‘Jungle Fever’ on the B ~ side. Produced by the one and only Joe Meek, this record was the first British instrumental to top both the British and American charts and started my love of instrumental groups.

The dawn of a new era was just around the corner ~ very soon the Beatles would arrive on the charts and take over the world and almost overnight any act that came before them was all washed up and out of date.

The very first record I went out and bought with my pocket-money was by the Kinks and called ‘All Day and All Of The Night’ for the huge sum of  money six shilling and 8 pence from the big department store in Gray, Essex.

How I loved those records ~ still do!