On Saturday June 7 th 1969  three of my friends Kevin, Arthur and Kieran and me caught the train up to London to see Blind Faith perform free in Hyde Park to about 200,000 people. It was a real beautiful summer’s day as we sat down on our

little patch of grass to watch the afternoon’s entertainment. First on that afternoon was the droning Third Ear Band followed by the Edgar Broughton Band who did manage to liven up the crowd with their open air anthem ‘Out Demons Out’.

Next on stage was Woodstock favourite Ritchie Havens who was great to see and then followed a quiet set from Donovan, and boy was it hot that afternoon! but it was better temperature wise when Blind Faith hit the stage at about 5pm. Billed in the music press as a supergroup this band consisted of Eric Clapton on Guitar and Ginger Baker on Drums from the legendary group Cream also Stevie Winwood on Keyboards from Traffic  and the little known Ric Grech on Bass from Family. Straight away you could tell that this group would not be following in the footsteps of Cream but as the first self titled album would show this was a half~decent band which were not given much of a chance to progress and fell apart during the following US tour as Clapton quickly lost interest in playing long solos and decided to hit the road with Delaney & Bonnie as a back up guitar player and was more influenced by the Band album ‘Music From Big Pink’ than anything that he and Mr Winwood could come up with at this point! Unfortunately Stevie Winwood being the great musician he is, does not have the greatest stage present, but it was great to be there to see them.

As we trundled back on the underground to our home town in Essex we decided that such a big debut concert was not the best idea for Blind Faith this new under~rehearsed band but all was not lost as that evening we were going to see Jethro Tull at the Roundhouse in Barking Essex. A full day of music!  I had loved Jethro Tull’s  first album ‘ This Was’ with Mick Abrahams on guitar and was sad to see that he had left the band due to a difference of opinion with Ian Anderson about which direction to take the band in, but the new album ‘Stand Up’ had just been released and tonight we would be seeing their new guitar player Martin Barre play live. Mick Abrahams would go on to have a solo career and form the band Blodwyn Pig who I also saw live at the Marquee Club. 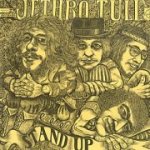 When we finally got in the place was packed and it was a hot night inside the building and outside and there was little room to move we were like sardines but the band came on stage and straight away delivered a stunning performance with Ian Anderson in his Aqualung tramp stage outfit standing on one leg like a demented ballet dancer all hair and beard with flute in hand and his eyes popping out of his head delivering his outrageous words. Brilliant! you could see that their was only room for one star in this band as they went on to be one of the world’s best bands. On guitar new man Martin Barre with his Gibson Les Paul turned up to 11 let us all know that he could play with beautiful guitar solos and rhythm on  each song. On drums Clive Bunker was as solid as ever along with bassist Glen Cornick they supplied the back~bone to the Jethro Tull sound for many years to come.

It was so hot and packed  inside the hall that by half~way through their performance people down the front of the audience were fainting and had to be lifted above the crowd and passed back over the top of the audience and out to the St. John’s ambulance people in a tent out the back of the  building.

So ended the lesson. One of the greatest day of music from Blind Faith in the open air in Hyde Park to Jethro Tull in an old bingo hall in Barking Essex. Amen.

The Story of Cap’n ‘P’ And The Attos

Whatever you do don’t make it sound like Sergio Mendes!

I was lucky enough to see Patto play in the early 70’s on a double~bill with Argent. It was Argent who were the headlining act because of their current hit single ‘ Hold Your Head Up ‘ but it was Patto who stole the show for me even though they were plagued with a bad sound system on the night. The reason that they stole the show was because all members of the band were outstanding players with plenty of backbeat and they seemed to not take themselves too seriously on stage laughing and joking all the way through their performance. Their humour was to also come across on the vinyl releases.

Their producer on all three albums and a big supporter of the band was Muff Winwood, the brother of Stevie Winwood and the original bass player in the Spencer Davis Group who went on to be the head of A&R at Island Records and the producer of the first Dire Straits album. An all round music man.

In the late 60’s the band started out as a 5 piece named Timebox and dented the charts slightly with their single “Beggin” before dropping down to a 4 piece and changing their name to Patto after the singer’s name.

Their first self~titled album Patto starts off with the song “The Man” and straight away on the first track you know you are going to be in for something good as the song builds and then leads into a vibraphone solo from guitarist Ollie Halsall. This band can rock with a slightly jazzy feel and all four parts are equally brilliant! but in Ollie they had an outstanding guitar slinger who would be in my top ten all time favourites for sure ~ just listen to the solo on ” Red Glow ” and “Hold Me Back ‘ with the rest of the band pushing him along and also the great overlooked Mike Patto on vocals.

Sales were poor on the first album but they were back in the studio and on tour with Ten Years After so things looked rosy!. ” Hold Your Fire ” starts off with the eight minute epic title track with the band in great form but once again the sales were not there and as Muff Winwood became head of A&R at Island the boys moved to the label with him.

Roll ’em Smoke ’em was released in 72 and what an album it is with every track being great ~ slightly different from the previous two with Ollie playing more piano and keyboards on this one but this band had come of age and if you know any guitar players that are into metal or rock playing then I think they should have a listen to ” Loud Green Song ” on this album and then think again about what they are playing!  ROCK ON OLLIE!

Sadly this was it for the band as their sound fell on deaf ears and the band turned turtle but they have left behind them three beauties and all of them are a valuable addition to any collection.

Members of the band were :

Mike Patto on Vocals : Mike went off to join Spooky Tooth after trying to hold Patto together for so long, then got back together with Ollie Halsall in Boxer before being diagnosed with Leukemia and this fighter passed away on the 4th of March 1979, and he is still singing the blues on red. A great loss!

Ollie Halsall on Guitar : Ollie played with Allan Holdsworth and Jon Hiseman in Tempest for a while before becoming  Kevin Ayers sidekick touring and playing some great guitar on his albums before moving to Spain where he passed away in 1992 from a heroin overdose. What a waste!

Clive Griffiths on Bass : I met Clive one evening at Kings Cross station in the mid 70’s and he was driving a taxi to make ends meet and was playing in Joe Brown’s band but tragedy was to strike the Patto’s again! Both Clive and drummer John were on their way home from a gig with Joe’s band~ one minute they were driving the next they were in intensive care. The driver of an on coming car had slipped into sleep and hit them head on with Clive now being paralysed and suffers from memory loss and can’t even remember the Patto’s.

John “Admiral” Halsey on Drums: After Patto John joined Neil Innes in Grimm’s before becoming a member of the highly successful Rutles project. John also along with Clive suffered bad injuries from the car accident but has recovered with his sense of humour intact